What Is The Smartest Breed Of Dog?

Recent studies may have shown that dogs are not the smartest animals (as many people previously thought them to be). In fact, pigs, rats and crows are now considered smarter. Nonetheless, dogs are still prized for their intelligence. They can be trained to follow rules or perform certain tasks, such as sniffing out certain objects, hunting or herding. They can even do tricks. They can learn from experience or observation, they can solve problems, and some even say they can express different emotions just like we do.

Now, you might ask: what is the smartest dog breed? The truth is, it’s hard to tell since there are no clear parameters for determining a dog’s intelligence. Also, some dog breeds are very good at doing one thing while others are good at doing lots of things. Some dogs may not know how to fetch balls or jump through hoops, but they know how to open doors or how to catch birds. Even among the same breed, some dogs are smarter than others, sometimes depending on the handling of the owner. Sometimes, even very smart dogs may seem dumb because they don’t respond to commands. In truth, they are just being stubborn because they feel they are smarter or more dominant than their owners.

This is a testament to the German shepherd’s intelligence. Indeed, they are considered smart and eager to learn, able to perform tasks and follow commands in as short as five repetitions, and to remember them for a long time to come.

German shepherds are not just excellent working dogs, though; they’re also famous movie stars — two German shepherds have stars on Hollywood’s Walk of Fame. They are loving companions, loyal to their owners and willing to protect them against any threat at any cost. They are especially fond and protective of children and there have been many stories of their saving children from danger.

When it comes to seeing-eye dogs or guide dogs, Labrador retrievers are the top pick. Why? Not only are they easy to groom, friendly and patient, but they are easy to train and eager to please.

As with German shepherds, there are many stories of Labrador retrievers having saved their owners. One of the most famous is Endal, who pulled his owner, Allen Parton, to safety after he was knocked out of his wheelchair by a car, and then called for help at a nearby hotel. Endal can also perform various tasks, including removing the card from an ATM, and emptying the washing machine. Another Labrador retriever, Jake, joined the search for survivors during the September 11 attacks, and also after the onslaught of Hurricane Katrina.

Labrador retrievers also make good pets. In fact, Bill Clinton, Vladimir Putin and Prince William all own Labs. They are even-tempered, fun-loving and affectionate, and they get along well with children and other pets.

Many dog trainers and owners consider the Border collie to be the world’s most intelligent dog breed. Border collies, after all, are bred to be herding dogs and they are the best at what they do. They can herd sheep, cattle, pigs and even birds. In fact, they are commonly used to herd wild birds away from airport runways and golf courses.

As pets, Border collies can be taught to follow hundreds of commands and perform various tricks, such as fetching balls, jumping over obstacles, barking the answers to simple math problems and sorting objects. In fact, they have to be stimulated mentally and physically or they will end up getting destructive — the downside of being the workaholics of the dog world.

Border collies are known for having a high level of concentration. They can stare down a sheep for a long time, in order to get it to obey, and they can focus on their task until it has been fulfilled.

The poodle may be better known for its good looks or for its popularity in dog shows. However, it is more than just a beauty. It is also one of the smartest dog breeds. It is a quick learner, able to do what it is told just after a few repetitions (so long as the trainer or owner is not whispering or shouting), which makes it excel in obedience training. It is also known to be clever. In fact, most poodle owners say their dogs think like humans.

The Xolo is a dog breed you might not have heard of, which isn’t surprising considering how rare it is. When you do, however, you’re sure to hear it described as an intelligent dog, able to learn commands quickly. Xolos are especially easy to housebreak, since they have been bred to be family companions. Aside from their intelligence, Xolos are prized for their loyalty, hardiness and natural guarding instinct. They are also known to be very clean dogs, with grooming habits similar to cats.

The Doberman pinscher may have a reputation for being aggressive, but this only turns out to be the case when it is not handled or trained properly. Dobes need firm owners who set consistent rules and give them plenty of exercise. If this is the case, Dobes are eager to please, easy to train and dedicated to the tasks they are given. Because of this, they make good police dogs and are also sometimes used as therapy dogs.

Although often mistaken for a collie, the Shetland sheepdog is a unique breed of its own, with a keen sense of intelligence. It can be easily taught to follow commands, and will remember them for a long time if given regularly, making it excel in obedience trials.

Like the Border collie, the Shetland sheepdog is a herding dog. When used as one, it is an excellent herder that can keep both small and large animals in check. As a pet, it may still herd children and chase after moving objects, including cars, but it can be trained to behave.

Together with the German shepherd and the Doberman pinscher, the Belgian Malinois is known for its police work. In fact, it is the dog breed currently used by the US Secret Service. It is especially good at sniffing out bombs, which it was used for in Afghanistan, and at sniffing out narcotics at airports. It is also used during arson investigations, to sniff out chemicals that may have been used to start fires.

Belgian Malinois need to be trained from between the ages of eight weeks to six months in order to become excellent working dogs or good family companions. They are happiest when given something to do, and can easily understand what needs to be done.

When it comes to herding cattle, no dog does it better than the Australian Cattle dog. No matter how stubborn the cows are, this dog doesn’t give up, eventually outsmarting the cow or tiring it out.

Can the Australian Cattle dog make a good pet? That depends on the owner. Left on its own, the Australian Cattle dog can be destructive, overprotective and even aggressive. It can also bark, chew, dig and chase a lot, which are all part of its natural behavior. When trained well and given plenty of exercise, however, it is responsive to commands and can be very obedient to its owner, even excelling in obedience trials. 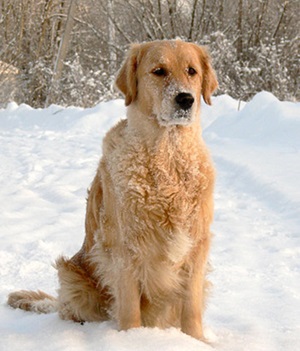 Golden retrievers are one of the most popular dog breeds around the world and there’s a good reason for that. Not only are they friendly, charming and playful, but they are also among the most intelligent dog breeds. Indeed, Goldens are highly trainable, which makes them good choices for guide dogs and search-and-rescue dogs. They are always eager to please and are known to do well in dog competitions.

Think you remember what you’ve read? Try out the Smartest Dog Breed Quiz

Top 10 Smart and Intelligent Dogs in the World

Liquid helium can climb over the sides of a dish.