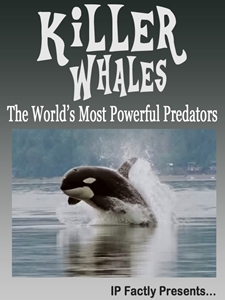 “I just did a project on or orcas and I think I got a+ on it. From your book I learned a lot more from you I didn’t even know half the stuff I know now you made me a lot smarter. Thanks, Aaron Weir” (Amazon Review)
“Wonderful book on killer whales. It has great photos and video links. My daughter is writing a book report on this book. Highly recommended!” (Amazon Review)
“My congratulations to the publishers of this book… This is more than a book, it is a well illustrated and well written book, but each idea, each sub-section of the book is linked to a video. The most amazing video I saw was a “KILLER WHALE VS. WHITE SHARK”. Who do you think wins? It is not even a fight, it is a slaughter, the huge white shark is next seen upside down in the killer whales’ jaws… and the killer whale comes back to where the tourists are to show them and boast that it won!!!

Unbelievable! I would have nightmares except that killer whales have never attacked humans. They seem to know that they shouldn’t attack humans… and they communicate with humans, because they know we’re interested in watching them, too.

I envy a teacher who would have this book to teach a class of children about killer whales. What a way to teach a fascinating lesson! I loved this book, and I will tell teachers to not miss it.
Five stars, because I couldn’t give it ten stars.” (Amazon Review)

Killer whales are also featured in the following books:
25 Most Deadly Animals in the World
25 Top Predators in the World Book
25 Whales, Dolphins and other Sea Mammals
25 Polar Animals

Here we look at the most powerful predator in the world – the killer whale.

Here’s a handy page that can be printed out showing the different types of killer whales.

We’ve split the videos into helpful sections.
Just click on the links below to go to the video page.

What will killer whales eat?

How killer whales teach their young:

Orca young shown how to hunt

Orcas teaching how to wave wash

Killer whales – wolves of the sea:

Orcas vs sperm whales – attack on a female and her young bull calf!

Killer whales and humans – whaling together:

Kayaking and a VERY close experience with Killer Whales

Crushed in a kayak by a killer whale!

Humans… a problem for orcas:

25 Strangest Animals in the World!