10 Interesting Facts About the Vikings

The Vikings were some of the Norse people who originated from northern Europe. From the 8th to the 11th century they traveled by sea and discovered new lands, where they were known for violent attacks. They stole treasure, burned buildings and killed or enslaved the native inhabitants. The Vikings were more than just pirates, though…

1. The Vikings did not call themselves “Vikings”

The people we know of as Vikings originally came from Denmark, Norway and Sweden. Today, these three countries together are called Scandinavia. The people from these countries used to speak a language called Old Norse. We don’t know what they called themselves, but the people they invaded referred to them as Norse, Norsemen, Northmen or Danes. In the 19th century, we started to use the word “Viking” (which comes from the Old Norse word vikingr, meaning “pirate”).

Raiding and piracy were certainly what most people across Europe saw and wrote about, but this was only one part of their culture. Their men might go raiding in their youth, but they would be expected to settle down and raise a family as they grew older, and a great part of their culture involved farming and fishing. They also established trade routes from Canada to Turkey to Russia. 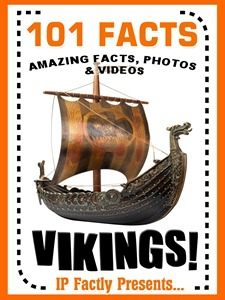 2. Some people believed that the Vikings were sent by God as a punishment

The Vikings are remembered in history for their brutal raids. An example of this was in 793, when their longships arrived in the northeast of England. They burned buildings, destroyed a Christian monastery, stole gold, and killed and frightened the locals. The British church leaders believed that the Vikings had been sent by God to punish the sinful people of England.

3. The Vikings worshiped many gods

The early Norse people followed a pagan faith, which means they believed in many different gods. Odin, the Allfather, was the chief god. Odin’s son Thor was the god of thunder and carried a powerful hammer. Loki was a mischievous god who played tricks on the other gods and the people on earth. The stories (called “sagas”) that the Norse told about their gods were full of drama — the gods married, had children, had affairs and sometimes separated and swapped partners. The stories also involved mythical monsters and beasts. The gods would often fight and try to prove their own powers. One example of such a story is when Thor tried to lift a giant cat in an effort to show his strength. He failed, only being able to lift one of the cat’s paws. The gods lived in Asgard, which was connected to the human earth by a rainbow bridge. As the Vikings traveled the world they adopted the Christian religion. They referred to their old beliefs as Forn Sed: The Old Custom.

4. The Vikings were expert boat builders

The Vikings traveled by sea were very skillful boat builders. Their boats were called longboats and were just that — long. They ranged from 52 to 120 feet (16 to 37 meters) long and as many as 60 Vikings could fit on each one. They were designed to be easy to steer on high seas as well as through shallow rivers. The longboat could land easily on beaches, which was an advantage during their raids.

The boats were made out of oak or pine; any gaps were plugged with animal hair mixed with tar. They had both oars and sails, and the front of each boat had an elaborate carving designed to intimidate enemies — common examples were dragons or sea serpents.

5. A Viking law-breaker could be killed by anyone

The Norse had a complex social structure. The high leaders were called jarls — related to the English word “earls”, which is still used today to describe a British nobleman. Kings didn’t ascend by right of parentage, as they do today, but were chosen as exceptionally strong leaders and fighters who could protect and defend the people.

The Norse would meet in assemblies to resolve problems, and the king would have the final say. Common issues discussed during these assemblies were law-breaking and punishment.

Outlaws, those who had committed serious crimes, had no protection, and anyone could legally kill them.

6. Prominent dead Vikings were set on fire on a boat

When important people in the Norse community died, they were honored in unique funeral ceremonies. They would be laid in specially built burial ships with their clothes, jewelry, animals and all belongings. The ship would be set on fire and sent out to sea.

7. The Vikings were excellent cooks

As the Norse were people of the sea, some of their favorite food was fish, but since they were also proficient farmers, they had a varied diet. They raised animals (like cattle, pigs, goats and poultry), and grew vegetables (such as peas, beans and cabbage) and grains (like barley, rye and oats). They also gathered wild-growing nuts and fruit, and hunted wild animals such as deer, wild boar and bear. The Norse were good at preparing and cooking tasty food, and were fond of using spices to enhance the flavor. They also fermented cabbage, baked bread flavored with honey and made sauces using berries to add to their meat dishes. As the Vikings traveled, they adopted and adapted new recipes and ingredients into their diet.

8. The Vikings abandoned their sick children

The Norse people took pride in strength and power. If a child was sickly and not able to fight or be useful in their society, they were considered to be weak and a burden. They would leave these children to die either by abandoning them or throwing them into the sea. Children who were strong enough to survive the first five years (which only 80 percent did) would be expected to contribute to the family by learning how to fight, work the farm or work in the home. They were expected to take on tasks independently as soon as they were physically able. Norse children did not go to school and only 75 percent of children made it into adulthood. Despite a harsh daily life, they did find time for play. They would make play boats and swords and they even made ice skates. In the evening, the whole family would sit together to sing songs and tell stories around the fire.

There was a special type of Viking warrior called a berserker. They were known to be the scariest and most terrifying of all the Vikings and were certainly the ones who committed the most violent acts during their pirate raids. These berserkers were also famous for eating everything and anything they could find, and taking dangerous drugs. They wore animal skins and made noises similar to a wolf howling when going into battle, in order to intimidate the opposition. The word “berserk” is used today to describe someone who is reckless or out of control.

The native English people continued to fight the Vikings and the battle between them raged for centuries. In the year 878 King Alfred was able to stop the Vikings from conquering the entire of England. The 10th century saw even more battles, but the Vikings were pushed back as the English regained their land. The last Viking king Eric Bloodaxe was finally driven out in the year 954. By this time, the rest of the Vikings who lived in England agreed to stay under English law and be ruled by the English monarchy.

In 1066, the Viking king Harald Hardrada (meaning “hard ruler”) did try to take back England in one final and bloody fight known as the Battle of Stamford Bridge. He was killed by an army led by the English king Harold II (who was himself defeated later that same year by the Normans). This battle is thought to be one of the last Viking raids in Europe.

The Vikings who had settled in England just stayed and continued their lives, eventually mixing in with the rest of the English population.

Think you remember what you’ve read? Try out the Vikings Trivia Quiz!

Diamonds can be made from peanut butter.