Great white sharks are the largest predatory sharks in the ocean, able to grow over 17 feet (5.2 meters) long. They have powerful, torpedo-shaped bodies and large mouths filled with 300 pointed teeth, each 1 to 3 inches (2.5 to 7.6 centimeters) long. With their size and their strength, there is no doubt a great white shark can attack and even kill humans, and they have, many times. In fact, great white sharks have attacked humans more often than any other species of shark. The question is: why?

There are two different kinds of shark attacks — provoked and unprovoked. Provoked shark attacks are pretty easy to explain. After all, if someone hurts you or disturbs you, you usually fight back. Sometimes though, we don’t know when we are disturbing the sharks. We wander into their territory without knowing it and then they attack to make us go away. This usually happens to surfers and divers.

One thing is perfectly clear — humans are not a regular item on the great white shark’s menu. We are not fatty or filling enough, after all, unlike the blubber-rich animals that great white sharks love to eat. So why do they attack us? There are three theories about unprovoked great white shark attacks.

Some scientists propose a simple reason — hunger. Any animal, when hungry, will eat anything to survive. Let’s say you haven’t eaten for a day and you’re really hungry, then you come across a plate full of cookies, with no one watching over it. Wouldn’t you grab the cookies and eat as much as you could? In the same way, if a great white shark hasn’t eaten for weeks — maybe it hasn’t been able to find its usual food or is not feeling well enough to hunt — and comes across a helpless human, it will grab the human and eat it.

It isn’t likely, though, to come across a very hungry great white shark. Great white sharks, after all, are excellent hunters who can easily take seals, whales, other sharks, tuna, sea turtles, sea otters and gulls. Also, they have a slow metabolism, so in spite of their size, they do not need to eat much to survive and a medium-sized meal can last them more than two weeks.

Some scientists call it a case of mistaken identity. The great white shark mistakes the human for its usual prey, a seal maybe. After all, if you look at someone swimming from below, especially if that person is on a surfboard, it can look like a seal. Great white sharks often go for a seal’s fins — they rip one off to prevent the seal from swimming away and then come back to finish the meal. In the case of a human, the shark goes for an arm or a leg, realizes that it doesn’t belong to a seal (oops!) and leaves, uninterested in eating more.

The third theory may explain this careful behavior — that the great white shark attacks a human out of simple curiosity.

Say you haven’t seen a lit candle ever before in your life. You’re puzzled by it, curious about how it works. You’re not content just to look at it. You can’t figure much out just by looking, after all. And so you smell it and try to touch it, getting hurt in the process.

Once it knows the answer, the great white shark swims away. The investigation is over. The result? The strange creature is neither food nor a threat, not worth fussing over.

What Are the Chances?

Indeed, if great white sharks really meant to hunt and eat humans, there wouldn’t be just 300  or so attacks. There would have been hundreds, thousands. No one would dare swim anymore. Yet, even though there are probably thousands of great white sharks to be found all over the world, only around five people are killed each year, and usually not from being eaten, but from bleeding to death because of wounds that were too serious or were not treated immediately.

More people are killed each year by being hit by lightning or falling down the stairs. Many more people are bitten by dogs than by sharks all in all. In contrast, hundreds of great white sharks are killed by people every year for their fins and for their oil.

Of the victims of great white shark attacks, over half are below the age of 30 and 92% are male. Also, most attacks occur between 2 and 4 PM, in waters no deeper than 20 feet (6 meters), meaning most attacks occur close to the shore. 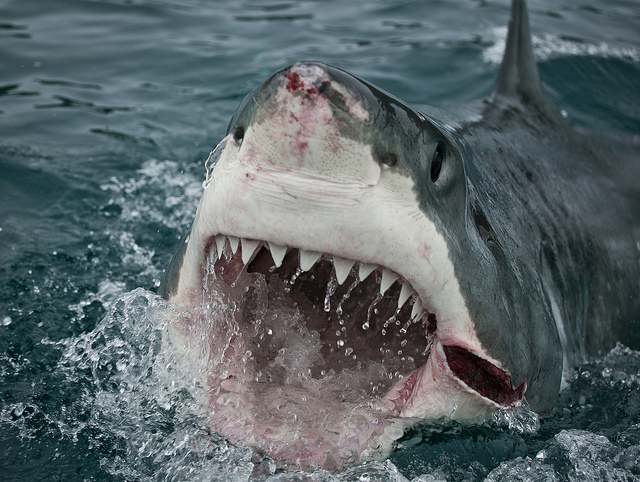 If you want to lower your chances of being attacked by a great white shark, do not swim alone, and stay with the rest of your group. Do not wear shiny jewelry, which can be mistaken for fish scales, and do not wear bright colors, which make you easily seen by great white sharks. If you notice you are bleeding, get out of the water and bandage the wound. Remember, the smell of blood attracts great white sharks.

In the unlikely and unlucky event that you are attacked, fight back as hard as you can. Don’t play dead — that makes you an easy meal. Hit the great white shark with whatever you can manage, going for its eyes, the gill slits on the sides of its head, or its snout. The more trouble you give the shark, the more likely it is to let you go.