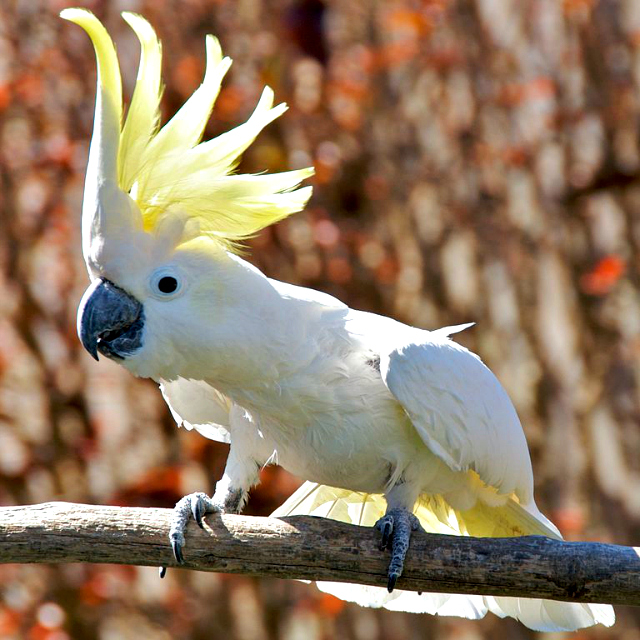 Parrots are colorful birds that are found all over the world. They range in weight from less than an ounce to as much as nine pounds. Those that are native to South America, Central America and Mexico are called New World parrots while the ones in Asia, Africa and Australia are Old World parrots and sometimes have powdery feathers. There are more than 300 species in the world today, though sadly, some of them are endangered.

Here are some other fun facts about parrots:

1. Many parrots can imitate sounds.

One of the reasons that parrots make good pets is because they can imitate sounds. In the wild, they imitate the calls of other members of their flock, which allows them to communicate about important things such as food and the presence of danger. Indeed, unlike other birds which know their calls without being taught, parrots know by learning and learn by imitation. They also imitate the calls of other animals which serves as a defense against predators. For example, if a snake is approaching, they can imitate the call of a hawk, scaring the snake away.

In homes, parrots can copy the sounds of a phone ringing, a vacuum cleaner humming, water running, the doorbell chiming and other sounds. Of course, they can imitate human speech, too. They do this because they think these sounds are made by their flock and, therefore, they have to learn them.

2. Parrots are among the most intelligent birds.

Indeed, parrots learn well. They can not only speak words but associate them with objects or situations. They can use tools and solve problems. Some scientists even believe they have the logic of a four-year-old, proving this with different experiments. Parrots are also very playful birds. In case you didn’t know it yet, playing is a sign of intelligence.

3. Parrots are the only birds that can eat with their feet.

Parrots have zygodactyl feet. This means they have four toes on each foot, two facing forward and two facing backward. They have very strong feet that allow them to cling to branches for long periods of time and even swing from them or hang from them upside down. That’s not all they use their feet for, though.

Parrot feet are like human hands. They don’t just walk or perch on them. They can pick up objects with them and even pick up food and bring it to their mouths. That’s right. They can eat using their feet.

Want to know something even more amazing? Parrots have been observed to prefer one foot over the other. In the same way we humans can be left-handed or right-handed, parrots can be left-footed or right-footed.

The lifespan of a parrot varies from one species to the next. Small parrots usually live 15-20 years, medium-sized parrots 25-30 years and large parrots 60-100 years. Macaws are especially long-lived and one blue-and-yellow macaw named Charlie is believed to be more than 100 years old. Another macaw named Poncho, who has starred in several Hollywood movies, is claimed to be 89 years old. The record for oldest living parrot, though, is held by Cookie, a Major Mitchell’s cockatoo who is 81 years old.

One of a parrot’s main features is its curved, broad beak, the top beak often larger than the lower one. Parrot beaks are not only large, they are also strong. In fact, the beak of the hyacinth macaw, the world’s largest flying parrot, is strong enough to crack macadamia nuts, considered the toughest nuts to crack, as well as Brazil nut pods. It can even crack a coconut open. For this reason, parrots should be handled with care at all times.

6. Many parrots mate for life.

In order to find a mate, a male parrot puts on what is called a courtship display, parading itself, dancing or making various expressions and sounds to attract the female. Once the female chooses him, the two stay together for life, even outside the breeding season. They help each other find food, watch out for each other, sleep together and groom each other in order to strengthen their bond. Lovebirds are especially known for their tight bond since they spend long hours just sitting together on a perch.

During the breeding season, female parrots lay anywhere from 2-8 eggs, which are always white. Most parrots do not build nests, instead laying eggs in tree holes. After 17-35 days, the eggs hatch and the young are cared for by both parents until they are ready to leave the nest.

Parrots were first kept as pets by ancient Egyptians and then by the Indians and Chinese. They were brought to Europe in 300 BC, often kept by the rich or the nobility. Famous people who have owned pet parrots include Aristotle, King Henry VIII, Marco Polo, Queen Isabella, Marie Antoinette, Queen Victoria, Martha Washington, Teddy Roosevelt and Steven Spielberg.

Today, parrots remain the most popular pet birds in the world. Keep in mind, though, if you are planning to have a pet parrot of your own, that parrots need a lot of affection and stimulation. If not trained well, they can be noisy, chew excessively and bite.

Unfortunately, the parrot pet trade is one of the reasons many parrots are now rarely seen in the wild.

8. Cockatoos can move the feathers on their heads.

Cockatoos are Old World parrots that are often not as brightly colored as other parrots. Their feathers lack the chemicals that are responsible for the blue and green colors found in other parrots, so they do not have these colors. Their most distinguishing feature is their headcrest or the feathers on their head which, interestingly, they can move just as dogs can move their ears. When flying or landing, a cockatoo’s headcrest is often raised, as well as when it is scared, angry or excited. At other times, it is flat against their heads, making it seem like it isn’t there at all.

The kakapo is the world’s largest parrot. It can weigh up to nine pounds and grow over two feet long. The kakapo, however, is a flightless bird. It cannot fly. In fact, it is the only flightless parrot in the world. It is also the only parrot that is active at night, an adaptation that helps it escape the notice of predators.

Most parrots look the same whether they are male or female but the female kakapo is smaller than the male, with a longer tail and a longer beak.

While a kakapo cannot fly, it can jump and is good at climbing trees to eat fruits.

Sadly, the kakapo is now one of the rarest birds in the world.

10. The kea is the only alpine parrot in the world.

The kea, the kakapo’s cousin, is also a unique parrot. While most parrots live in warm places, the kea lives in a cold environment high in the mountains. It has thick feathers that keep it warm and a rounded body that allows it to conserve and preserve body heat. Keas are known to be very smart and curious birds. Sometimes, they can be too curious, however, and are known to peck at cars, backpacks and human clothing. They have also been known to steal wallets, passports, sticks of gum and pieces of jewelry. Quite the mischief maker, don’t you think?

Think you remember what you’ve read? Try out the Parrots Quiz!

For videos about members of the parrot family, visit:
Parrot, Parkeets and Budgie Videos .

Julius Caesar was kidnapped by pirates.