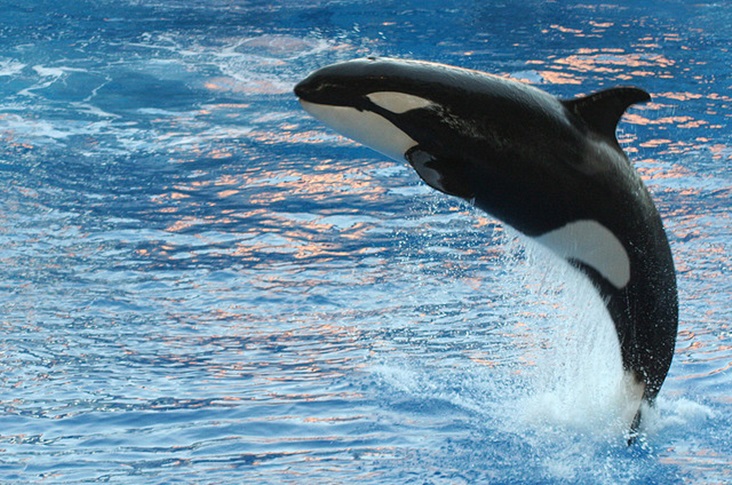 Did you know that killer whales are the top predator in the world’s oceans? Or that some scientists consider them to be smarter than chimpanzees? Or that they have been around for roughly eleven million years? Here are some other killer whale facts you might not have heard.

1. The Scientific Name of the Killer Whale Is Orcinus orca.

This is why the killer whale is sometimes called an “orca whale” or simply an “orca”. Orcinus is derived from the name Orcus, one of the Roman gods of the netherworld who punished evildoers — a fitting name for the ocean’s most fearsome predator. Orca, on the other hand, means “barrel-shaped”, referring to the round shape of the killer whale.

Why is it called a killer whale? The killer whale was once called “whale killer” by sailors who saw it attacking whales. Over time, the name was reversed.
The killer whale is also known as sword whale, assassin whale and blackfish.

2. The Killer Whale Is Not a Whale.

The killer whale is not a fish. It is a marine mammal. However, it is not a whale. It is in fact a dolphin, and the largest dolphin to boot.

3. The Largest Killer Whale Ever Caught Was 32 Feet Long.

Killer whales are carnivores. They eat fish, including great white sharks and rays, squid, crabs, lobsters, seals, sea lions, dugongs, sea birds, penguins, sea turtles and of course, whales, including baby sperm whales and baby blue whales. They also eat moose swimming in the ocean and according to scientists, will eat polar bears if the opportunity comes up!

How do killer whales catch sharks and rays without getting bitten? They grab them and prevent them from moving. When sharks and rays cannot move, they cannot breathe and eventually, they die from suffocation.

As for seals, sea lions and penguins, killer whales can tip the ice floe they are on, or cause waves to crash down on the ice, driving these creatures into the water. They can also jump out of the water or push themselves onto the shore to catch birds.

Killer whales hunt in groups, so they have a high hunting success rate.

Pods of killer whales can gather together to form a clan. They can also be divided into smaller groups called subpods.

Members of a pod travel, hunt and sleep together. They communicate with each other and help each other out in times of trouble. When one member of the pod dies, the rest are believed to mourn it.

Killer whales do not have smelling organs or a lobe of the brain dedicated to smelling, so it is believed that they cannot smell. They do, however, have good senses of sight and hearing. They can hear better than dogs and even bats. Using this excellent sense of hearing, killer whales practice echolocation. This means that killer whales produce sounds and then listen to the echoes. In this way, they can tell if objects or other animals are near or far, and just exactly how near or far.

7. Killer Whales Have Their Own Language.

The language of killer whales is one of the most complex in the animal kingdom. They produce high-pitched whistles, pulsed calls and low-frequency pops. They can even make clapping sounds with their jaws. The whistles are used for close-range or private communication, while the pulsed calls are used for long-range communication. Members of the same pod make the same calls, which the young ones learn from their mothers.

Aside from communicating through sound, killer whales communicate through touch and through various gestures such as head-butting and slapping their fins.

That’s a pretty long time, but it’s not surprising considering killer whales are so big when they are born. Female killer whales give birth to just one baby at a time. The baby, called a calf, is born in the water tail-first, and right after it is born, the mother guides it to the surface to breathe. Calves double their body size during their first year.

9. Killer Whales Can Sleep with One Eye Open.

Like other dolphins, killer whales cannot completely go to sleep, because they have to go up to the surface to breathe every now and then. Instead, they sleep with just half of their brains. If a killer whale’s left eye is open, that means the right side of its brain is awake and the other asleep, and vice versa.

One of the trademarks of a killer whale is its large top fin, called the dorsal fin. Killer whales have the largest dorsal fins among whales and dolphins, with males having larger dorsal fins than females. The dorsal fin is not made up of bones but of dense connective tissue, and it helps the killer whale swim fast in the open sea.

In the wild, a killer whale’s dorsal fin is upright, but in captivity, it often “flops”, or collapses to one side. There are several reasons for this, such as stress, dehydration and lack of exercise.

11. Killer Whales Are the Most Widely Distributed Mammals in the World (Not Counting Humans).

Killer whales can be found in all the oceans of the world, in both warm and cold waters, even in freezing waters. How do they survive the cold? They have a thick layer of fat just under their skin, called blubber. They also have a fast metabolic rate. This means that they break down food and convert it into energy very quickly. This energy helps keep them warm.

Killer whales can be found in the open ocean, but are more common in coastal waters. Some killer whales live in just one area all year long, while others migrate or move from one area to another, traveling short or long distances.

13. There Is No Record of a Wild Killer Whale Ever Attacking a Human.

Fearsome as they are, no killer whale has been known to attack, much less eat, humans in the wild. In captivity, it is a different story. Several trainers and marine park employees have been attacked by killer whales, some of them killed. However, scientists claim that this is due to stress on the killer whale’s part. After all, killer whales are kept in tanks which, however big, are still small compared to the ocean, and are separated from the other members of their pod, sometimes even from their young.

The title of most deadly killer whale belongs to Tilikum, who killed three different trainers in 1991, 1999 and 2010.

14. There Are Fifty-Two Killer Whales in Captivity All Over the World.

As of August 2014, there were fifty-two killer whales held in captivity in eight countries. Twenty-eight of them were in the United States. Of these killer whales, eighteen were captured from the wild and thirty-four were born and raised in captivity.

15. Killer Whales Are Not Endangered.

This does not guarantee that killer whales will be around forever. While killer whales are not hunted on a large scale, they can get easily sick from pollution. Their population can also go down if they have a harder time finding prey.

Titan was once a massive snowball.