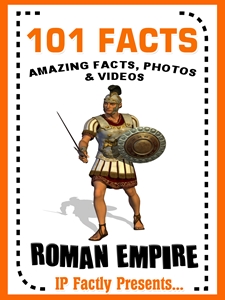 Over 101 amazing facts about Rome and the Roman Empire.

It contains facts, photos and awesome videos that show us more about this incredible civilization.

Buy this book at AMAZON

Taken from ‘101 Facts… The Roman Empire‘ by IP Factly

The world’s most popular fruit is… the tomato!

One man has been eating cheese pizza almost exclusively for the past 25 years.