Top 10 of the Most Dangerous Animals in the World

Most animals are afraid of us humans, living far from us and staying out of our way. They stay still or scurry off when we stumble upon them, fighting back only when seriously threatened. Some, however, are not afraid at all. They come near us and then fight back when we come upon them, or even without provocation, sometimes with fatal results. They do not hesitate to bite us. In fact, some of them even see us as prey. And the worst part? These animals can actually hunt and prey on us, possessing the upper hand in size or strength, or both, or a deadly weapon such as poison. Even if they don’t end up killing us, they can cause us serious harm.

These are the animals to try to stay away from — the most dangerous animals in the world. Here’s a list of the top ten.

Go ahead. Laugh. After all, surely it must be a joke that something so tiny, something you can easily squash with your fingertips, can be one of the most dangerous animals in the world.

Well, it isn’t. In fact, the mosquito is widely considered to be the world’s deadliest animal.

Its record? Believe it or not, more than a million people all over the world die from mosquito bites every year. That’s more than the number of people who get murdered by fellow humans each year! Most of these deaths are due to malaria — which claims a child’s life every 30 seconds — but there are also other sicknesses that mosquitoes transmit, such as the West Nile virus, dengue fever, yellow fever and encephalitis, and they can do this with just a single bite.

Only female mosquitoes bite, though. The males feed on nectar and other sweet things during their short adult lifespan — 5 to 7 days. Female mosquitoes can live for up to up to a month, or several months if it includes winter hibernation. During this time, they feed on blood, without which they cannot lay eggs. They feed until they are full, then rest to lay eggs, then feed again.

Mosquitoes are featured in the following book:
25 Beastly Bugs and Insects

The fear of snakes is known as ophidiophobia, and is one of the most common fears in the world. According to scientists, this is likely because snakes used to be one of the biggest threats to humans, back when humans still lived in the wild, and those who learned to stay away from them were more likely to survive.

There is a good reason to fear snakes. After all, some of them are big enough to suffocate us or even eat us, while about 600 species possess potent venom. Depending on the type of the venom and the amount injected, snake venom can cause paralysis, hemorrhaging and heart attacks within minutes. At its worst, snake venom can kill.

An estimated 100,000 people die from snake bites every year, while an additional 250,000 are permanently disabled. These are mainly in poorly developed countries, where antidotes are not easily available, if at all, and medical facilities are few and far between. In the US, 7000 to 8000 people get bitten by snakes every year, with only five to six of them dying.

For more on Snakes:
101 Facts… Snakes!
25 Awesome Snakes of the World…
IPFactly Snakes. 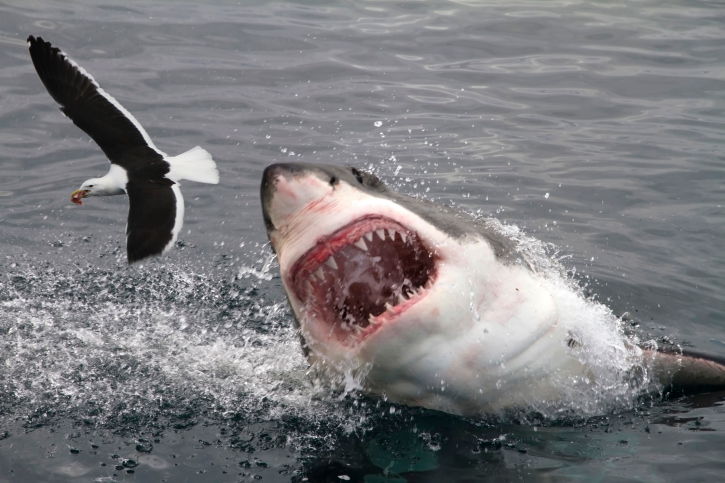 Now, this is an obvious culprit. In fact, you’ve probably seen a few shark attacks on television or in the movies. In reality, sharks are not as fearsome, with only around seventy-five shark attacks occurring every year and only four of them being fatal. In fact, you are more likely to get struck by lightning, bitten by a dog, to drown, or even be killed by a falling coconut than you are to be killed by a shark.

That doesn’t change the fact that sharks can kill. They have a keen sense of smell, an appetite for just about anything, large, sharp teeth and powerful bodies. Even if they just take one bite, you can die from the bleeding or lose a limb.

Of the 480 shark species, only four are considered dangerous to humans: the great white shark, the tiger shark, the bull shark and the oceanic whitetip, believed to be responsible for the worst shark attack in history.

For more on Sharks:
25 Most Awesome Sharks

Do you think only carnivores can be dangerous to humans? Think again. The hippopotamus is a herbivore — it almost exclusively feeds on grass — and yet, it is considered one of the most dangerous animals in Africa.

Why? Because male hippos are very territorial and aggressive by nature, while the females are very protective of their young. This ill temper makes them unlikely prey for lions and crocodiles. In fact, it is even more likely for hippos to kill them.

Hippos have enormous jaws that can deliver serious bites. They are even known to have cut people in half. In the water, they can capsize boats and crush or drown humans, all because they were put in a bad mood. Every year, nearly 3000 people are killed by hippos.

Not cuddly at all, are they?

An estimated 1500 to 2500 people die from crocodile attacks each year, many of which go unreported and unrecorded. Of these, the Nile crocodile and the Saltwater crocodile are responsible for most, which comes as no surprise given their size and strength.

The saltwater crocodile is the largest reptile in the world, able to grow over 17 feet (5.2 meters) long and weigh over 2000 pounds (907 kilograms). The Nile crocodile comes second at around 16 feet (4.9 meters), but is considered more deadly because of its strong hunting instinct and bad temper.

Crocodiles have the highest bite force among all animals — they have the strongest bite. Once they bite, they are unlikely to let go, resulting in severed arms and legs, that is, if you’re lucky enough to escape being chopped to pieces.

Every year, roughly 150 million people get stung by jellyfish, and about 100 of them end up dying. That makes jellyfish much more deadly sea creatures than sharks.

The box jellyfish is particularly deadly. It is responsible for the most deaths. In Australia, it is responsible for more deaths than sharks, snakes and crocodiles combined. The box jellyfish moves rapidly, often without being seen, and has tentacles that can reach nearly 10 feet (3 meters) long. You can get stung just by swimming near one, and the sting is described as very painful, like an electric shock. If untreated, the sting of a box jellyfish can kill in as little as two minutes.

Other dangerous jellyfish include the lion’s mane jellyfish and the sea nettle. The Portuguese man o’ war is also a culprit, with a sting comparable to being struck by lightning, though it is technically not a jellyfish.

The king of the jungle has a well-deserved reputation. Lions are powerful hunters that live in groups, after all, and they are known to kill roughly 250 people every year.

Although lions normally don’t eat humans, there have been several cases of man-eating lions, such as the pride of lions of Njombe, Tanzania, which ate as many as 2000 humans from a few villages. There are also the well-known lions of Tsavo, a pair of lions which devoured about thirty-five people working on a bridge along the Tsavo River in Kenya.

The YouTube video below is a collection of African lion videos. The list of videos featured is underneath.

African lions are featured in the following books:
25 Top Predators in the World

Slimy. This might be the first word that comes to your mind when you hear “snail”. What you might not know, though, is that snails can be very dangerous. In fact, they are among the world’s most dangerous creatures.

Of course, not all snails are dangerous. The ones in your garden aren’t. Some snails, however, can carry diseases like meningitis and schistosomiasis, which, though not usually fatal, can cause serious damage to the liver, kidney, bladder and reproductive organs.

Then there are the cone snails. These snails have a very potent venom which they transmit via tiny harpoons that they shoot out of their shells. If untreated, the venom can be fatal — around fifteen people die from cone snail venom every year.

The good news? Komodo dragons can only be found on some islands of Indonesia so if you don’t live there, you have no reason to fear. The bad news? If you ever come face-to-face with a hungry Komodo dragon, or worse, a pack of them, you’re as good as dead.

Komodo dragons can grow up to 10 feet (3 meters) long. They have saw-like teeth, sharp claws and powerful tails. Their worst weapon, though, is their saliva, which carries a lot of bacteria that can enter your blood and spread through your body, killing you slowly but surely.

Komodo Dragons are featured in the following books:
25 Most Deadly Animals in the World

This list started with mosquitoes and ends with flies, in particular, tsetse flies. Tsetse flies have something in common with mosquitoes — they suck blood. They are about the size of houseflies and are found in Africa. There, tsetse flies kill roughly 10,000 to 25,000 people every year. Most of these deaths are due to sleeping sickness, which can cause poor muscle coordination, numbness, insomnia and, eventually, death. A version of sleeping sickness affects animals and claims the lives of about three million livestock each year.

Think you remember what you’ve read? Try out the World’s Most Dangerous Animals Quiz!

Top 10 Most Dangerous Animals on the Planet

The Funniest Baby Sloth Video Ever!!!

Link #155: The Sun Will Swallow Earth In 5 Billion Years!