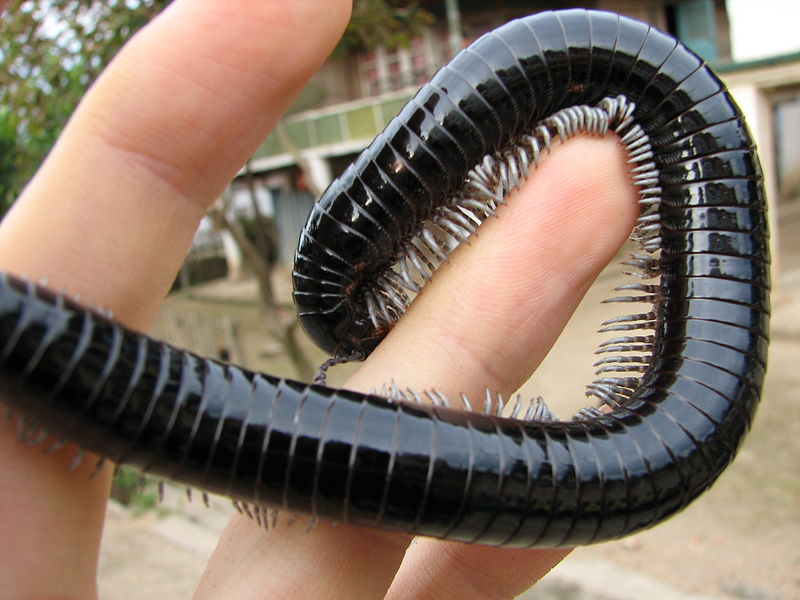 Before We Begin… What is Poison and is it the same as Venomous?

Poison is defined as any substance that can make a living organism sick or dead. Many plants use this as a form of self-defense, to prevent themselves from getting eaten or destroyed. Many animals are poisonous as well.

Now, you might think that “poisonous” means the same thing as “venomous”. That is a common misconception. Poisonous and venomous animals both produce poison, but the difference is that venomous animals deliberately deliver their poison (then referred to as venom) through fangs or stingers, but poisonous animals simply carry the poison in their bodies, and only become dangerous when they are eaten or touched.

You probably already know that the poison dart frog and the pufferfish are two of the most poisonous animals in the world, and that both are able to kill within hours. But did you know these other seemingly innocent animals are also poisonous?

Nearly all snakes are venomous, but very few are poisonous. The floral snake, also known as the tiger keelback snake, is both. Indeed, it can not only deliver poison through its fangs, but can also simply excrete it to protect itself from predators.

What makes the floral snake even more amazing is that it does not make its own poison. Rather, it gets toxins from the poisonous toads that it eats, and stores them in glands around its neck. Not only is the floral snake immune to the poison, but it uses it for its own defense, processing it so that it becomes even more toxic.

Floral snakes can even pass their store of poison to their young so that they are protected from birth. How’s that for a head start?

Butterflies are pretty and delicate, but did you know some of them can be poisonous? The orange and black monarch butterfly is one example.

Monarch butterflies lay their eggs exclusively on milkweed plants, which produce a toxic sap. After the eggs hatch, the caterpillars feed on the leaves of the milkweed plant and take in the toxin. It carries this toxicity into adulthood, spreading the toxin into its wings but retaining the most deadly dose in its abdomen. This way, whether a bird tries to eat them wing first or body first, they have some sort of protection. One bite and the bird flies away, discouraged by the foul taste of the monarch butterfly’s toxins.Unfortunately for the bird, monarch poison is the gift that keeps on giving — even after the foul taste is gone, the poison can give the bird an upset stomach.

Simply being poisonous isn’t enough for monarchs; they also exhibit mimicry, and use it to mimic the viceroy butterfly. Viceroy butterflies taste even worse than monarchs because they get their acid from willow trees. Between tasting like milkweed sap and sounding like viceroy butterflies, monarchs give off many signs that they’re not a good meal.

The spur-winged goose is one bird you definitely want to stay away from. While it may seem friendly, it can have a very bad temper (especially during breeding season), and will chase away anyone who comes close to its nest, whether they be other spur-winged geese, other birds, or humans. To make matters worse, it has sharp spurs on the bends of its wings (hence its name), which it can use to inflict injury.

Now, you might wonder — why not just eat this foul-tempered bird? The answer is: you can’t. Spur-winged geese eat mostly blister beetles, which are toxic. In fact, they have been found to be capable of killing full-grown horses. The spur-winged goose is immune to blister beetle toxins, allowing them to store the toxin in their body. Even after cooking, these toxins can still be harmful. In fact, if you eat 0.0004 ounces (10 milligrams) of the toxin, you can die. Death by goose.

If you see a brightly colored animal, beware. It is likely poisonous. This is true in the case of Pfeffer’s flamboyant cuttlefish. While it is normally brown, this cuttlefish turns red, black and purple with golden spots when it is alarmed, with the tips of its arms turning a particularly dark shape of red. This makes it a beautiful sight, almost like a flower blossoming on the ocean floor. However, this color change isn’t a fasion statement — it’s actually the cuttlefish’s way of warning others of its poison.

It is common knowledge that some frogs are poisonous, but while you may think these frogs are found in swamps or rainforests, one could very well be found right in your yard or at a nearby park — the common toad. The common toad is widespread throughout Europe, being one of its most common amphibians.

When threatened, the common toad stands on all four of its legs, making itself look bigger in order to intimidate its foe. Its main weapon, however, is its toxicity. The glands on the skin of the common toad produce a secretion which is not only foul-smelling but potentially lethal. It doesn’t even have to be eaten; all it takes is one touch to experience the effects of the toxin, which include difficulty breathing, increased salivation, vomiting, paralysis, hallucination and seizures, all of which can lead to death if untreated.

Even the tadpoles of the common toad secrete certain substances which prevent them from getting eaten. Unfortunately, the great crested newt doesn’t seem bothered by these substances at all, and continues to eat the tadpoles. Others make holes in the tadpole’s skin and suck out its juices, avoiding the nasty secretions. Also, some grass snakes seem unaffected by the poison carried by adult common toads, eating them regularly. While some animals are safe from the common toad’s poison, humans aren’t. Beware.

If you’ve ever come across a millipede on your front porch and tried to kill it, you’ve probably noticed that it stinks as it curls into a ball. This “stink” comes from the millipede’s toxins, some of which can cause rashes on human skin, irritate the eyes of birds and other small animals, and burn the skin of insects that try to eat them, especially ants. These toxins are so effective against insects that some monkeys irritate millipedes on purpose before rubbing them on their bodies, making use of the toxins as flea deterrents. Now, that’s something to think of the next time you see a millipede.

Newts in the genus Taricha are collectively called Pacific newts, mainly because they are found exclusively on the Pacific coast of North America. They are mostly brown or black but, when threatened, they will lie down on their backs, exposing their colorful bellies. This is a warning to a predator that they are poisonous. Not all predators, however, heed this warning. They still eat the newt and die shortly after — a loss for both.

The toxicity of the four species of Pacific newts varies. The rough-skinned newt is the most toxic, with one recorded human fatality. Even when not eaten, this newt can still cause harm by irritating human skin, or eyes if a person who has just touched it touches his eyes without washing his hands. Pacific news carry the same as that of the pufferfish — tetrodotoxin.

With its black and orange feathers, the hooded pitohui of New Guinea is nice to look at. It’s nice to listen to as well. However, it’s for your eyes and ears only — your skin should keep its distance. If you make the mistake of touching this pretty bird’s skin and feathers, your skin will tingle and eventually feel numb. In fact, the American ornithologist who studied this bird in 1989, John Dumbacher, described his skin as being on fire. He also tried to put one of the bird’s feathers on his tongue — not a wise decision, to be sure — and, as a result, his tongue felt numb for hours.

What makes the hooded pitohui dangerous? Scientists believe the bird gets the toxins from certain beetles, the same beetles that poison dart frogs get their toxins from.

The Spanish fly is actually not a fly, but a bright green blister beetle known for producing a substance known as cantharidin. This substance gives the beetle a bitter smell and taste; italso irritates the skin and eyes of predators. It is present in the beetle’s skin as well as in the coating of its eggs.

Since 1810, scientists have found a way to isolate cantharidin from Spanish flies. This is an effective poison since it can be mixed with food or drink without anyone noticing. Just a few drops are enough to cause death. This poison is associated with the Medicis and also was believed by some to have caused the death of Latin American leader Simon Bolivar. In 2010, however, Bolivar’s body was exhumed and in 2011, a report was released saying that he did not die of poisoning. Spanish flies, however, are still poisonous, despite not being responsible for the poison that killed Bolivar.

10 Poisonous Animals You May Not Be Aware Of

Link #83: African Grey Parrots Have the Intelligence of Six-Year-Olds!