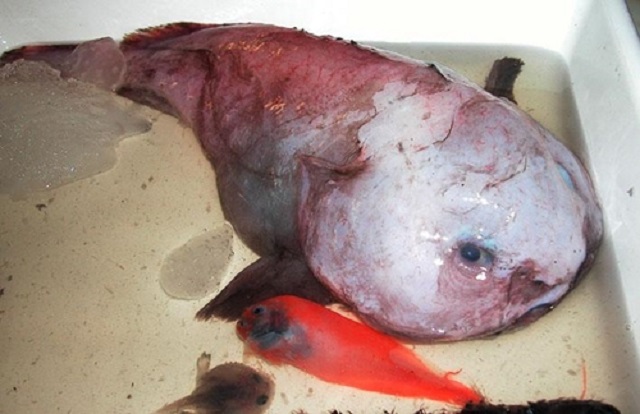 The blobfish. You might have heard of it, or you might not. It is extremely rare, after all. If you have, it’s probably because it was chosen as the world’s ugliest animal in 2013, beating other bizarre creatures such as the axolotl, the naked mole rat, the purple frog and the proboscis monkey. Why is it considered so ugly? And what else is there to this mysterious, miserable-looking creature? Is it a freak of nature, or a wonder of nature? Let’s find out.

1. Is the blobfish real?

The first time you hear the word “blobfish”, you might doubt whether it’s real. After all, who calls a fish a blob? It sounds like a poor joke, right? Then again, the dumbo octopus, the vampire squid, the chicken turtle and the Christmas tree worm are all real, which just goes to show that you shouldn’t judge an animal by its weird name — or that it isn’t always easy for scientists to come up with a unique animal name.

Yes, the blobfish is real. It might look like something out of a fantasy or horror film, but it is a real fish. Its scientific name is Psychrolutes marcidus, which means it belongs to a family of fish known as fatheads — you could say ugliness is in the blobfish’s blood. Not much is known about the Pyschrolutidae family except that they have large heads, live on the ocean floor and that their family name comes from the Greek word psychrolouteo, which means “to have a cold bath”. They like to live where the water is cold, after all.

The blobfish, in particular, lives at depths of up to 3900 feet (1189 meters) where the normal pressure is about 118 times higher than that at sea level. It can be found off the coasts of mainland Australia, Tasmania and New Zealand.

2. The story behind the blob

Let’s take a closer look at the blobfish’s transformation. Why does it change so drastically? It’s because the blobfish has no skeleton and no real muscles. It is simply made up of a jelly-like substance. Now, why would it be like that? It’s actually one of the blobfish adaptations.

You see, most fish have an organ called a swim bladder, which allows them to float and swim. Such an air-filled organ, however, would collapse under extreme pressure, blowing the fish to bits. So instead of having a suicidal swim bladder, the blobfish is made up of gelatinous flesh. This flesh is less dense than water, so the blobfish naturally hovers above the ocean floor. Indeed, the blobfish doesn’t need to expend any energy in order to swim, which is well and good, since food is not exactly abundant on the dark ocean floor.

Why is the blobfish considered ugly? As the US National Oceanic and Atmospheric Administration (NOAA) puts it, the blobfish “looks like a big, blobby tadpole, just a mass of pale, jelly-like flesh with puffy, loose skin, a big nose and beady, staring eyes.” It has also been likened to the comic strip character Ziggy, but with its mouth permanently dropping at the corners. Indeed, one look at the blobfish and you’ll know why it is so named — it looks like a pile of pink blob, unlike any other creature, in the ocean or above it.

The blobfish, however, only looks like a blob when it is out of water. It hasn’t actually been photographed in the water (since it lives in such deep waters), but scientists believe it looks just like its cousin, the blob sculpin (Psychrolutes phrictus) with a large head, a tapered body, a flat tail and spikes instead of scales. The reason it changes so drastically in appearance is because of the change in pressure. Out of water, the air pressure decreases exponentially and so the blobfish is reduced to… well, a blob. In contrast, humans, too, would be reduced to blobs (or worse) when subjected to the high pressure that the blobfish is used to. Then we’d be the ugliest creatures on earth.

Blobfish have no bones and therefore, no teeth. Even if it could bite, it would turn into a blob before it even had the chance to bite a human – they don’t survive the change in water pressure very well and we humans would be squashed long before we reached the depths the blobbies live.

6. What do blobfish eat?

No one has ever seen a blobfish eat. However, scientists believe that it feeds on crabs, sea urchins, sea pens and shellfish. How does a blobfish eat? Since it has no muscles, the blobfish cannot hunt, so it simply opens its mouth and sucks in whatever drifts by. Yes, the blobfish is one lazy animal, but you would be too if you lived in the cold, dark and extreme water pressure.

7. Can you eat blobfish?

The irony is that, while blobfish are often caught in trawling nets, they never make it to the dinner plate. The moment the blobfish reaches the surface, it turns into a blob and dies, becoming not only bland but completely inedible. Let’s face it. Who would want to eat a blob?

How blobfish mate remains a mystery, as do most of the things about them. All that is known is that the female lays thousands of tiny pink eggs right on the ocean floor, and either she or her mate guard the eggs by “sitting” on them until they hatch. This is the most efficient way for them to ensure the survival of their young, since there are no plants around to provide shelter for the eggs, or any caves where they can make a nest.

9. Is the blobfish endangered?

Unfortunately, blobfish are currently endangered. In fact, they are close to extinction. While they aren’t hunted, blobfish are often caught in bottom-trawling nets. These nets go across the ocean floor, scooping up lobsters and other deep-sea fish. Sadly, the blobfish gets scooped up as well, and even though it is often tossed back into the ocean, by then it is already too late.

In 2006, nature conservationists from all over the world gathered to propose the restriction of bottom trawling on the high seas, but were unable to reach an agreement, leaving the fate of the helpless blobfish greatly uncertain, especially since the deep-trawling fishing fleets of Australia and New Zealand are very active, and the blobfish isn’t found anywhere else in the world.

Keeping a blobfish in a tank might seem like a good way for you to amuse yourself and your friends, but it’s one crazy idea you should forget. No blobfish has ever been caught alive and even if they had been, you would need a tank with extremely high water pressure, to keep it alive. You would have better luck preserving a dead one, immersing it in alcohol (like the one on display at the Australian Museum), that is, if you want to stare at a miserable-looking creature everyday.

The blobfish isn’t as ugly at home – The Smithsonian
The blob fish lives deep under water in a high pressure environment – it’s not usually that blobby.
The blobfish faces extinction – The Telegraph
Thanks to deep sea trawlers the blobfish – officially the world’s ugliest animal – may be facing extinction.
The World’s Ugliest Animal – It’s Official! – BBC News
Finally – the recognition it deserves.
Is it really that ugly? Really? – Science News
How hideously ugly is it?