Axolotl Facts You Need to Know!

The axolotls are also called Mexican walking fish and are also often confused as lizards. In fact they are neither “fish” nor “lizards”, they are a type of amphibian called salamanders. They have a tadpole-like appearance, even the larger adults retain this appearance their whole life.

They are carnivores and their diet consists of small prey like insects, small fish and worms etc. Locating the prey by smelling they will then suck the food right into their bellies like a vacuum.

The axolotls have the awesome ability to re-grow limbs that have been lost. They can even regrow parts of their brain. It’s this special power that has kept them alive as a species. Scientists have been keen to examine how they are able to perform this incredible feat. 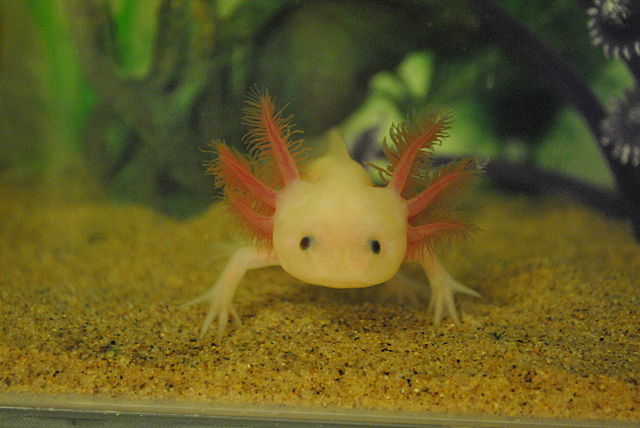 They have a flat-shaped wide head that is wider than the body and they come in a range of colors, black, brown, pale pink, albino etc. Albino and pale pink are found often, because they spend most of their time hidden under rocks and crevices. Living in the bottom of the lake makes them less vulnerable to predators.

Endangered in the Wild

In the wild they are endangered and are only found in a few of the waterways around Mexico City, Mexico. The city was originally built around Lake Xochimilco, and Lake Chalco but the growth of the city has seen the lakes disappear – along with the axolotl.

Axolotls for sale in the USA

Their numbers are growing but not in the wild. Their odd appearance has made them a favorite as a pet and there are axolotl for sale in the USA – usually in larger pet stores. There are now some good guides available on the web detailing the best ways to look after them eg http://www.axolotl.org/

Axolotls are featured in the following books:
25 Endangered Animals
25 Weirdest Animals in the World!

The YouTube video playlist below contains videos about axolotls. Details of the videos featured are underneath.

In Japan, 90% of mobile phones are waterproof.

Abraham Lincoln was a wrestler.