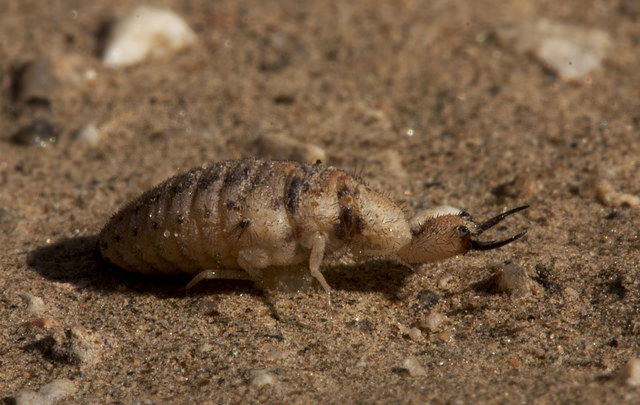 The antlion is neither an ant nor a lion. It is actually the larval form of any of about 2000 species of the family Myrmeleontidae. The antlion is called so because it mainly feeds on ants; it is like a “lion” among the ants. They are predacious babies. A fully developed larva is about 0.6 inches (1.5 centimeters) long, with a life cycle basically like that of a caterpillar — when it is ready, it spins a coccoon, and later emerges as an adult that resembles a dragonfly.

Antlions like to set their traps in places where it is dry and where the soil particles are loose and small. They dig a circular, funnel-shaped pit and hide at the bottom of it. They are great at flicking, since that is how they dig the pit — they use their round body as a plow, and then their head to flick the grains upward. When unsuspecting prey falls into the pit, the antlion grabs it with its jaws. The prey cannot escape the pit because the wall is so crumbly; the more it tries to climb up, the more the grainy wall crumbles down. Once the antlion has seized its prey it sucks the body fluid out and flicks the carcass out of the pit.

In North America, antlions are called “doodlebugs”, because of the doodles they leave on the sand while looking for a suitable spot to make a trap.

Antlions (also known as doodlebugs) are featured in the following book:
25 Beastly Bugs and Insects

The YouTube video playlist below contains videos about Antlions. Details of the videos featured are underneath.