Ancient Egyptian technology had a great impact on the many civilizations that followed. Their technology managed to survive centuries so that, even today, some of it can still be seen and even used. Egyptians made use of many simple machines and ideas that they invented for large and small projects.

Our word “paper” comes from the Greek word papyros, or as we write it today, papyrus — which was the writing material created by the ancient Egyptians. Papyrus was made from the tough and fibrous interior of a stiff, reed-like plant that grew (and still grows) in marshy areas along the banks of the Nile. Papyrus sheets were made into scrolls which would be filled with writing — on everything from religious texts to literature and music. The ancient Egyptians did not share their secret of how to make papyrus, though, so that they could sell it to other peoples. If everybody knew how to make it, there wouldn’t be much of a market to sell it to! The city of Alexandria in ancient Egypt boasted a famous library filled with records and scrolls, but unfortunately, it was completely destroyed. Vast amounts of knowledge — of history, literature and art — were destroyed along with the library.

The writing system of the Egyptians began with pictograms dating back to 6000 BC. Pictograms were simple illustrations of the things they represented. These pictograms had their limitations, though, so over time other elements were added. The new elements included alphabet-like characters that represented certain sounds, and various other characters. These allowed the Egyptians to write down abstract things names and ideas. The writing and record-keeping abilities of the ancient Egyptians were extraordinary. The ancient Egyptians are renowned for their hieroglyphics, which were a mix of alphabetic and syllabic symbols and ideograms (pictures representing whole words).

Both male and female Egyptians placed great importance on hygiene and their appearance. Makeup was worn not only for appearance but also for medical, religious and cultural reasons. Eye makeup was first invented by the Egyptians around 4000 BC, and it is still in style. Ancient Egyptians combined soot with a mineral called galena to make a black ointment known as kohl. The word “kohl” is still used today. They also made green eye makeup by combining a mineral called malachite to color the ointment. To the ancient Egyptians, the more color worn by a person, the higher the social ranking. Even the statues of gods and goddesses wore makeup.

The ancient Egyptians’ civil calendar had 365 days. There were twelve months in each year and thirty days in each month, with five extra days added the end of the year. This calendar correlated with the flood cycle of the Nile so that the farmers were informed of the best times to plant and reap. The year was divided into three seasons — akhet (inundation), peret (growth) and shemu (harvest).

Evidence suggests that the plow was probably first used by the Egyptians around 4000 BC. The early plow was not a very effective method of farming. Around 2000 BC, the Egyptians improved it by hooking it to a team of oxen. This new and improved ox-drawn plow made use of the power of oxen to pull the plow, and therefore was a much quicker and easier method to loosen the soil. In the earliest designs, the plow was attached to the horns of the oxen, but this was not a very good idea because it interfered with the animals’ breathing. Later on, straps were used to attach the plow to the body of the oxen, making a much more effective method. The ox-drawn plow revolutionized ancient Egyptian farming.

Evidence of ancient Egyptian ink can be still seen today — thousands of years later, the ink is still either entirely or partially visible on manuscripts. They mixed soot, vegetable gum and beeswax to make black ink. To get other colors, they replaced the soot with other organic materials, such as ocher, which made red-colored ink.

The sundial was a type of clock used by the ancient Egyptians. The earliest instrument to use the sun to measure time was known as a shadow clock, which was simply a vertical stick or pillar which cast a shadow, and the time of day would be known by the length and direction of the shadow. This was improved upon by the invention of the sundial. There were many kinds of sundials used in the ancient world, but one of the best-preserved sundials found from ancient Egypt consisted of a flat base with twelve lines projecting from a hole that held an upright wooden or metal bolt. As the bolt’s shadow moved across the lines, the time could be told. As sundial technology continued to be improved, the ancient Egyptians were even able to tell which were the longest and shortest days of the year.

The water clock enabled the Egyptians to read the time at night. It was made from a stone vessel shaped like an inverted cone, that had a tiny hole at the bottom to allow the water to drip. The water dripped from the hole at an almost constant rate. Along the inside of the vessel, columns of equally spaced markings allowed a person to tell what the hour was by the level of the water. There were twelve of these columns of markings, one for each month. Priests used these water clocks to determine the times to perform nightly rites and rituals at the temple.

To keep their heads free from pests, ancient Egyptians shaved their heads bald during the hot summers. However, since baldness was not regarded as aesthetically pleasing, they invented wigs. The wigs also protected their heads from the sun. Both men and women wore wigs, except priests (who may not have felt they needed them) and laborers (who may not have been able to afford them, or may have felt they were too hot). Ancient Egyptian wigs were made of human hair, sometimes with plant fiber or sheep wool added to increase volume. They were covered with resin and beeswax, which gave them their stiff quality and braided appearance. Both black and blonde wigs were made. 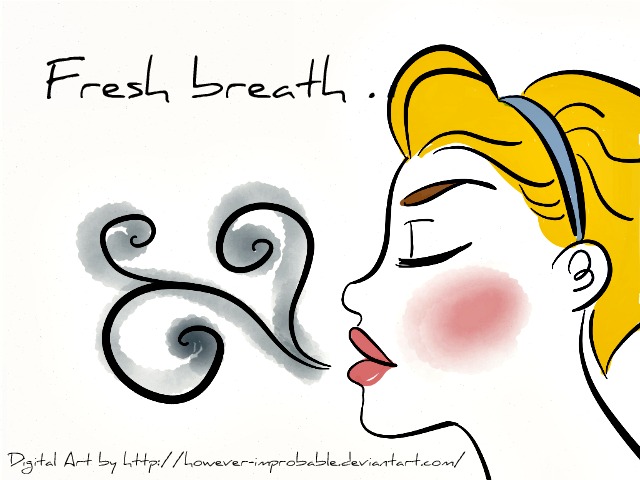 Today, we have dentists to help solve dental problems (which are mostly caused by junk food), but the ancient Egyptians did not have dentists (even though they did have specialists for other medical problems), and their dental problems were from a different source. They ground their grain into flour using stones, and therefore a lot of grit from these stones got mixed up with the flour for their bread. This sandy grit wore down the tooth enamel, exposing the tooth pulp and causing the risk of infection. Back in ancient Egypt, just like today, poor dental health meant bad breath. As a solution to this problem, they made the first ever breath mints! These mints were made from a mix of frankincense, myrrh and cinnamon boiled with honey, and then shaped into pellets.

To learn more about the Ancient Egyptians, visit: