Link #87: Ancient Filipinos Used the Yoyo As a Weapon!

If you read our last post, then you already know how the Philippines is home to one of the strangest island – lake complexes with the largest sub – sub island on a lake. There are many other strange things about the Asian island country. For example, did you know that there are 23 active volcanoes spread across various islands on the Philippines?

Or did you know that the unassuming toy you played with as a kid – the yoyo – was used as a weapon by ancient Filipinos? How can you use something this simple as a weapon? Keep reading and find out!

How Did Ancient Filipinos Use the Yoyo As a Weapon?

Many historians suggest that the yoyo was invented in the ancient Chinese civilisation. They speculate that the yoyo travelled from China to other regions of the world such as Greece and Philippines. Along with this speculation, they also say that the Filipinos used the yoyo as a weapon for hunting and even during battles.

The logic is that they threw a contraption made of a stone on a 20-foot long rope or string at an animal’s legs. Because of the weight of the stone, the rope would get entangled in the animal’s legs which would allow the hunter to close in for a kill.

In battles, some historians think that the Filipinos used stones on a string to defend against attackers from a higher position. Supposedly, the rope allowed the heavy stone to be retracted.

How Did the Name Yoyo Come About?

While half the historians in the world believe this, there is another fact that is even more interesting about the yoyo. This is the fact that the name of this toy can be traced back to the Tagalog language.

Tagalog, interestingly, is a native language in the Philippines. The name yoyo is a combination of two words which are yo and yo. The word means come. So, the name of the weapon or toy becomes come – come.

How Old Is Yoyo Really?

This record is essentially a historical document that contains references to the yoyo being used as a toy in Greece. In addition to this, there is also a vase hailing from this period that has a picture of a young boy playing with a yoyo. For the Greeks, yoyos also had a special significance.

These toys were given to Greek children and were a crucial part of the transition to adulthood. As per historic texts, children in the ancient Greek civilisation were required to submit their yoyos to their gods by placing them on their altars as a rite of passage to adulthood. The ancient Greek yoyos were made of a wide variety of materials including terra cotta, wood and even metal. 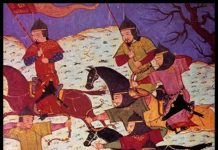 Make Rainbow in a Tube.

10 Things You Need to Know About Egypt’s Pharaohs